Greetings, I’ve been silent. Like you I have been overwhelmed by events. I had written two updates, but things moved on so fast they became irrelevant. Also recently there has been a concerted effort to unify the message to the general public. To whomever managed that: Congratulations, grab yourself a cat herding medal. To the BMA: hire that person/team sharpish.

Where are we now?

Well there are positives and negatives. Lets start with the negatives:

But there be positives:

In the short term, The NHS is going to be largely ignored by the media, unless someone ties it to an EU issue, you’ll be out of the front pages. You’ll notice that the BMA have called a new round of strikes. Yes they are not full walk outs. Why? because as soon as a photogenic child or woman dies, thats it, game over.

Yes it’s hard to swallow, but the way doctors can win is through a combination of fraternity (well sorority as well) patience and sheer force of will.

You have been repeatedly told to engage with your trust executives. Why? because its much harder to consider forcing something unpopular through if you know you’ll be told off in person, repeatedly. Nagging really does work. You need to take great pleasure in politely making your superior squirm under weight of the government’s hubris.

This is also why getting out and meeting the populous is crucial. Its easy to paint Tube drivers as money grabbing dick bags, because you never meet/see them in real life. Its far harder to hate someone in person, trust me, I’ve tried.

I know that right now, the Tory party look like a tower of strength. That facade is about to crumble. Deep in the backbenches there is a core of Tory MPs that are rebellious little tarts. You can see them visualised here: (you should read the original blog post too): 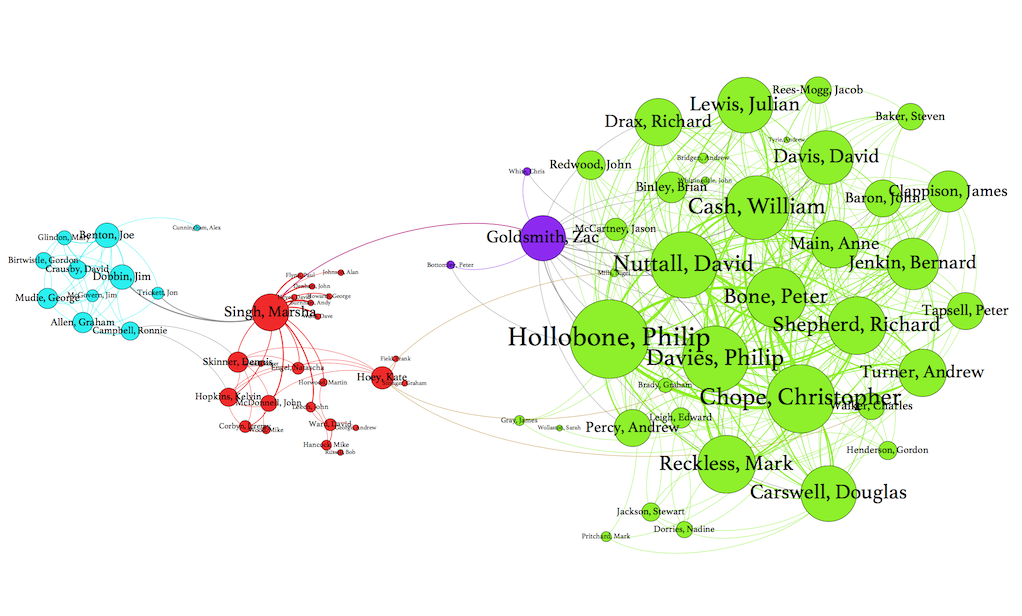 The MPs I’m talking about are highlighted in green. The government has a majority of twelve. You’ll notice that there are more than twelve MPs in that rebel alliance. (granted its slightly out of date, but most of them survived the 2015 cull.)

This affects me how?

Because one need a majority to force through changes. Given the backdrop of pensions reform (read middle class people potentially loosing out on hundreds of thousands of pounds), benefit cuts starting to really bite(hahaaa fuck the poor, I thin that was in the manifesto), old people’s service being scaled back and massive local government cuts, Tories in marginal seats are really starting to feel the burn.

Labour are a lame duck, but a lame duck with strong public support on the NHS. Yes, they are unelectable, but only because the Tory party hasn’t ripped it’s self a new anus, yet. Mind you, You think the Tories are an ominshambles, just image the clusterfuck a Corbyn-coalition would be.

There will be a new budget soon, and Osborne noted tax dodger & chancellor will be forced to either hike taxes, or cut more deeply (because of his own stupid “must be in surplus” law) Having magically protected core Tory voters (the old, rich, aspiring & middle classes) from the worst cuts, he won’t be able to keep it up any longer.

Then there is the EU. Right now, Boris, Gove, and IDS are drawing up an attack plan to unseat Cameron, Osborne and their hangers on. Something between 50 and 120 Tory MPs are looking at each other and figuring out who/what to back. The flies are circling, ready to lay their eggs in the rotting flesh of the Tory party. Things have a high chance of reaching 11.89 on the bat-shit scale.

What does that mean in practice?

The Tories’ majority of 12 will vanish in an instant if anything vaguely EU based pops up. MPs are vain, vindictive little shits, and will look for revenge at every opportunity. Wrecking a bill to embarrass the government? You Betcha.

Like divorcing parents, each camp is trying to shower gifts on the children. This is because to unseat the other side needs the support of the majority of backbenchers. Using the correct language, the NHS should be able to extract more resources, so long as it becomes a hot button issue, tangentially related to the EU.

Lets be honest, We are entirely dependent on the EU and commonwealth for safe nursing levels. However, having hoovered the Philippines, Portugal, Spain, and the rest dry, we are really starting to struggle. If that doesn’t rattle the latent racist in the core Tory vote, I don’t know what will. Its the same for doctors.

Stay united. As I’ve alluded to before, Doctors are only heard if they speak with one voice. You’re not the only ones receiving a Eton mess style bum fucking, its nurses, consultants and numerous other NHS workers. At the moment GPs are weighed down by idiotic “in my day” & “the new offer isn’t so bad” types. Nurses are being hit with the “you strike, you get sacked” stick. You need to support and coach your fellow (wo)man. You need to help them elect competent leaders.

Junior Doctors cannot continue to fight in isolation in the long term. Once you settle the contract imposition, you’ll have to help out other parts of the NHS.

What not to do:

Do not attack your fellow junior doctor. Yes, there are a broad range of opinions, starting with “we shouldn’t ever strike”, passing through “I’m so fucking hardcore I’m not opting out of EU-WTD” finally stopping at “I’M GONNA STRIKE TILL THE COUNTRY BLEEDS”, but that’s life, you need to accept it and move on.

Your task as junior docs is to seek consensus. Craft it into a media narrative, and fling it around like an industrial slurry spreader (Something that has already begun to happen)

So be kind to your fellow doctor. Debate, but not squabble, Support, but be critical. Be obstinate, but not whinge. Finally praise but don’t be a fucking kiss arse.